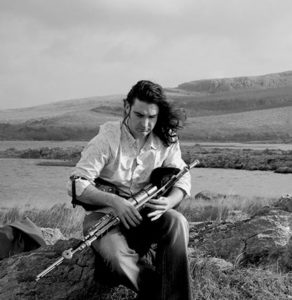 Cork Pipers’ Club was founded in 1898 and is the oldest pipers club in the world.  The club holds regular classes in the Wilton SMA Hall starting in January and September and as well as an annual club Tionol (pipers gathering).  If you are a beginner in need of a practice set, the club has a limited number of loan sets to help get you started. The club have been presenting a concert at the folk festival for 19 years, this year they present Michael (Blackie) O’Connell, Simon Pfisterer and Eoin O’Brien.

Lives in Ennis and nowadays ranks as one of Ireland’s most outstanding uilleann pipers, with an exuberant & fast-flowing performance style.  He also fits in a teaching / tutoring role at the University of Limerick’s Irish World Academy of Music & Dance.  Both of the following two performers are past pupils of his.

Hails from Cullen, Co. Cork.  Later when his family settled in Killarney, Co. Kerry he began attending tin whistle lessons with Pádraig Moynihan.  In recent years Eoin has taken up the pipes. He currently attends the University of Limerick where he is studying for his Master’s Degree in Irish Traditional Music Performance – (for part of which he has researched the life and times of the late Jim Dowling, in whose honour an annual Uilleann Pipe & Trad Festival is held in Glengarriff.)

Originally from Bavaria in Germany, Simon started to play various kinds of bagpipes from the age of 8 before falling in love in 2011 with Irish music & especially with Uilleann Pipes.  He is currently studying uilleann piping in the BA programme at UL under the tuition of Blackie and various guest tutors.  Simon has been performing with his bands, projects and as a solo artist at festivals & concerts throughout Europe, in China and in the United States.