A Tribute to Séamus Creagh

A Tribute to Séamus Creagh 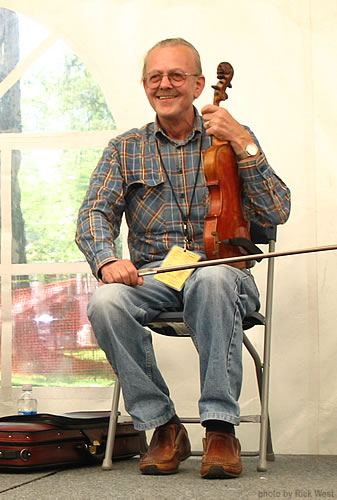 Séamus Creagh (1946-2009), was born in Killucan, County Westmeath in 1946. In 1967 he made trip to Baltimore in West Cork, just for a weekend, this trip started his long association with Cork, it’s traditional music and musicians. In 1977 Seamus Creagh made his first recording with accordion player Jackie Daly on the Gael Linn label. This album is now generally acknowledged as one of the seminal recordings of the music of Sliabh Luachra. In the late 80’s while in Newfoundland he recorded the CD ‘The Brule Boys in Paris’ with the group Tickle Harbour and a solo CD ‘Came the Dawn’. When Seamus returned to Cork, he recorded with Aidan Coffey, with Con O Drisceoil and Hammy Hamilton on the CD ‘It’s no Secret’ and a CD ‘Island to Island’ with musicians from Cork to Newfoundland. His final recording before his untimely death in 2009 was a double CD ‘Tunes for Practice’ is a legacy from Séamus for all who would like to learn his music. Each year since 2010 in St. John’s Newfoundland, a traditional music festival is run in memory of Séamus.
The concert features;
Matt Cranitch & Jackie Daly, for many years, accordion maestro Jackie Daly and Matt Cranitch on fiddle have been among the foremost interpreters of the rich Sliabh Luachra tradition of instrumental music. Their new album, Rolling On, draws upon this rich legacy. As Dan Neely said in the NY Irish Echo, “Separately, they are brilliant to hear but together they are sublime.” Matt and Jackie are spreading the popularity of Sliabh Luachra music all over Ireland and North America, from Allihies to Newfoundland and from Clifton to the Catskill Mountains.
Donal Lunny & Paddy Glackin are special guests at the Séamus Creagh concert. Paddy is one of Ireland’s best-known traditional fiddlers. He was born in Dublin with strong family links to Co Donegal. He is also a former member of The Bothy Band and an all Ireland fiddle Champion in 1973. His 1980 groundbreaking experimental-trad LP ‘Hidden Ground’ with Jolyon Jackson is still an all time favourite with many music followers. Dónal Lunny will partner Paddy on bouzouki in Cork. Dónal has nurtured Irish music for many decades and has been founding member of some of the seminal bands in the traditional music scene. His band career has expanded from Emmet Spiceland to Planxty to The Bothy Band to Moving Hearts and more recently to LAPD.
Jimmy Crowley has been a central figure in the Irish folk scene since the enthusiastic reception of his debut album,’ The Boys of Fairhill’ in 1977. With his band Stokers Lodge their mission was to present the street ballads of Cork city. Jimmy has just published major book with146 songs featuring many of those street ballads. The book’s title is ‘Songs from the Beautiful City: The Cork Urban Ballads’ and it’s a true history of the people of Cork City through their songs and song writing.
The Four Star Trio, Fada Ó Drisceoil, Johnny McCarthy and Pat “Herring” Ahern play with a heavy bias towards the music of Sliabh Luachra. Their recent and second CD ‘Magnetic South’ documents their tuneful dance music and great song writing. They regularly play in the Corner House Bar on Wednesday night and at festival in Ireland and abroad.
Colin (Hammy) Hamilton was born in Belfast in 1953 and started playing the Irish flute in the 70s. In 1979 he created the first Irish wooden flute making workshop, in the village of Cuil Aodha, Co. Cork, and today his flutes are considered as among the best in the world.
Aidan Coffey is a native of Bunmahon Co. Waterford he plays the C#D style of accordion. He joined De Dannan in 1988 and spent seven years touring and recording with them. He played for many years at An Spailpin Fánach with Seamus Creagh and recorded an album with him in 1999.
Geraldine O’Callaghan is a well-respected exponent of the Sliabh Luachra style of fiddle playing from Freemount, Co. Cork; Geraldine has a first class honours B.Mus degree from UCC, where she received an award for outstanding performance. She is a member of two All-Ireland winning Senior Céilí Bands; the Allow Céilí Band & the Shannon Vale.

Máire Ní Chéileachair is an accomplished sean-nós singer. She inherited her love of singing from her family roots in Kilnamartyra. Her singing has won many accolades including the Oireachtas na Gaeilge Sean-Nós na mBan trophy and a tribute to her commitment to sean-nós singing at Sean Nós Cois in 2013. She regularly sings at the Cork Singers Clun at An Spailpin Fánach and produced a CD of her favourite songs entitled Guth ar Fán.